The Ant and the Grasshopper – a financial fable to live by

The fundamental financial lesson I have lived by is summed up in the Aesop fable, written in the 6th Century BC — ‘The Ant and the Grasshopper’. 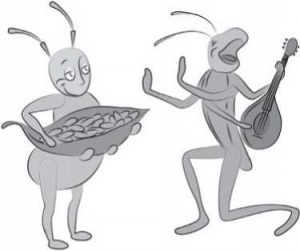 One beautiful summer day, a lazy grasshopper was chirping and sitting and playing games, just as he did every day. A hard-working ant passed by, carrying a huge leaf that he was taking back to the ant’s nest.

The grasshopper said to the ant,

“All you ants do is work all day.

You should be more like me and play, play, play!”

You should be working, for just the same reason.

What will you eat when the weather gets cold?

How will you feed your hungry household?”

“All you ants do is work and worry.

Slow down, don’t be in such a hurry.

The ant kept working, the grasshopper kept playing, and winter soon came. The ant had prepared for the winter and had just enough food stored in the nest to last through the cold, harsh weather.

Now that winter had arrived, the grasshopper couldn’t find any food, and soon became very hungry. But he soon remembered the hard-working ant he had made fun of during the summer. The grasshopper went to the ant’s nest and asked for food.

The ant, who was still busy keeping the food clean and dry, said,

“I toiled to save food for the winter freeze, while you spent the summer playing in ease.

I stored just enough food for the winter, it’s true, but I can’t feed you all winter, or I’ll starve too.”

He had learned to think ahead and plan for the future.

If you follow my plan, you don’t need to work nearly as hard as the Ant, but the principle is to build for the future, so as soon as possible your money can start working for you, instead of you always working to get money (and hopefully, you can avoid some very expensive mortgage traps along the way).

A Mortgage Australia Broker works for you, not the bank